For Phyre, Melon developed a mobile app that helps avoid the hassle of keeping the bunch of loyalty cards in your wallet. Now, you can have them neatly organized in a digital wallet instead. Also, Phyre enables you to browse the retailers' offers and to create a custom list with shopping items. 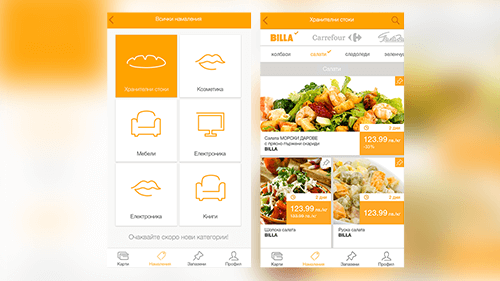 Phyre is a Bulgarian start-up company, striving to bring a new level of shopping experience to customers. Its goal is to become the main retailer-to-consumer communication channel. They are starting with digitizing loyalty cards and interactive browsing of offers and promise much more to come.

Phyre approached Melon in January 2015 to create their site and desktop application – an interface to organize loyalty cards and keep track of the promotions retailers offer. Gradually, the idea evolved into a mobile app, benefiting from all the assets of a pocket device.

Phyre aimed at an app that is specifically tailored to deliver efficient shopping solutions in a meaningful way.

The project involved all stages of a software application development. Melon’s UX/UI and Visual Design team began with interviews with the stake holders. They proceeded to gathering requirements and expectations from the end-users. Then systematized and synchronized the accumulated data with the client, created user stories and based on them – wireframes to show all individual screens and navigation. At this point the UX designers ran a usability test at Melon’s headquarters in Sofia to explore the functionality of the app. They took the users’ input into consideration and handed the project to the visual designers. All the icons are custom made especially for this app and feature unique design.

The end-users can either select an existing retailer or create a new one, if no one’s used their services so far. They have to scan the bar code or QR code on their loyalty cards and no longer will need to carry the hard copies with them. All they have to do is open their smart phone app at the cashier. And it can hold as many cards as they please.

Further, the end-users can stay up-to-date with all the sales and get rid of the promotional brochures because they can search the timely offers filtered by categories, retailers or just their names.

With Phyre they can create lists to add and save their preferred offers.

As of mid-October 2015 the application is available for Android and iOS.

At the beginning the leading technology was decided to be Android. But in the development process the client shifted to iOS. Though similar, these two platforms have their specific technological implementations. The navigation and the logic are rather different and Melon’s in-house developers had to be swift, flexible and responsive to meet the deadlines.

Initially the app had to be just a virtual wallet where the end-users could keep their loyalty cards. Gradually, it turned into a mobile app with catalogues linked to the respective card. The app is updated any time the retailers have new offers. The usability tests showed that the users are quite interested in the catalogues and now this is a big and important feature of the mobile app.

Thera are many more functionalities that are planned to be developed for the application. For example, payment methods and personalization based on the user’s interests and shopping habits. At the moment, when the users already have a loyalty card, they have to punch in the number, name and other required data. This can be automatized – once they scan the code, the rest could be filled in automatically. In other words the app can be transformed from a loyalty cards wallet into a device that issues such cards. It also is a handy tool to trace consumers’ behavior based on the statistics from the app and has the potential to become a cornerstone of the consumers’ buying habits and behavior.