For Cashbox, we developed an intuitive and user-friendly cross-platform mobile app with improved usability, so that their clients could request a loan with only a few simple clicks. Our team built it using iOS and Android native technologies (Swift and Kotlin) and managed the project with the scrum technique with daily calls and two-weekly sprints. 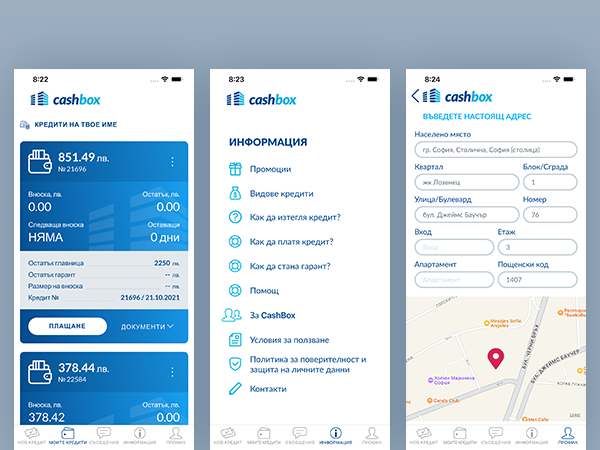 Cashbox is a decade-old Bulgarian platform providing instant loans. When they contacted Melon in 2020, they already had a dedicated team and a website, including the back-end. Even so, Cashbox needed an easy-to-use and adaptable mobile application to simplify the process, so that clients could request a loan with only a few simple clicks. They contacted Melon because they didn't have any mobile developers while running on a tight schedule.

Melon dedicated two Android developers, two iOS developers, and a Technical Project Manager. They developed an intuitive and user-friendly cross-platform mobile app with improved usability. The team built it using iOS and Android native technologies (Swift and Kotlin) and managed the project with the scrum technique with daily calls and two-weekly sprints. Some of the functions included were Push notifications, Dark mode, FaceID/TouchID login, WebKit. To communicate with the back-end service, Melon's team built a brand-new internal framework used for networking.

The requests to the servers were written in a short amount of time and were fully testable. The most complicated component, given the app's simplicity, was a calculator that automatically computes the interest rate and the monthly payment after the user enters the amount of money they wanted to withdraw. It also featured other payment options, such as weekly, monthly, or every three months. However, this was a pre-built component that our team integrated into the mobile app.

The most challenging part was incorporating the users' address forms. For starters, there are a lot of new neighborhoods that need to be updated to appear on the app. Some administrative addresses only include a neighborhood and a block number but lack a street name, causing the searching tool's confusion. This is a current problem for many applications. Melon's team overcame the challenge by having multiple brainstorming sessions with the client, which resulted in a robust solution and user experience. The team also relied on a third-party system that provided them with precise, comprehensive information on addresses in Bulgaria, even some small streets in remote settlements. The component's autocompletion feature never failed to identify any address.

Since the code was written by junior developers, the project's Team Lead was performing a thorough code review along the way. By writing comments and giving frequent feedback, he made sure that everything was well-written and functional before it reached the client. Occasionally, developers had to start from scratch, but they earned valuable experience in the process. Internal stakeholders were quite pleased with how the app turned out.

Melon's team enjoyed working with Cashbox and designing a mobile application for their company. "They are pleasant people, and we became friends. Each meeting was a delight since we talked about a wide range of topics, not only work-related," says Nikolay Kivshanov, the project's Team Lead. Cashbox's team frequently asked Melon for business analytics and consultancy. The two groups would hold brainstorming sessions, research competitors, compare ideas and analyze what they could improve. Melon's team found the process to be enjoyable because of these interactions.