Melon developed the new website of America for Bulgaria Foundation (ABF) that features a completely different user interactions. It’s presentational in two languages and tells ABF’s story, news and activities about the supported projects. Organizations can directly apply for funding since the site is integrated with the grant management system and users can subscribe for ABF’s newsletter. 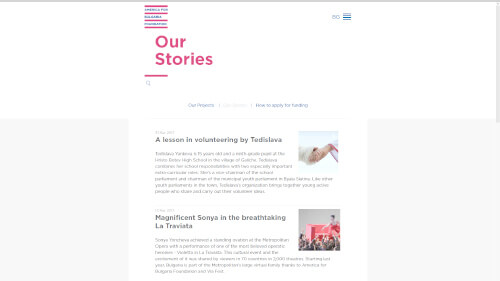 America for Bulgaria Foundation (ABF) was founded in 2008. It’s the largest foundation in Bulgaria and to date, has provided grants to over 350 partners. Each year it donates approximately $20 million in six key areas of interest: civil society and democratic institutions, education, arts and culture, cultural heritage and tourism, private sector development and economically disadvantaged.

Melon started working with ABF in November 2015 when Tribal – a digitally centric advertising agency, approached us. They were commissioned to revamp the foundation’s identity. Tribal’s job was to rethink ABF’s visual language and online presence. They engaged Melon to develop ABF’s new website.

Shortly after we delivered Phase 1, based on the first mock-ups Tribal designed, ABF began an organizational and management restructuring along with an exploration into new organization identity elements. The new website was put on hold. After ABF’s new identity was completed, in 8 months or so, we re-started the development of the site and entered Phase 2.

The process was entirely agile with weekly interactions. Every Friday we would show demos to both Tribal and ABF then consider and implement their feedback. The beta version was ready in one and a half months and the live site was released on January 17, 2017.

The most unnerving period was when both Melon and Tribal were on stand-by. Once the project was restarted and Melon was directly involved in the communication with the client, the work was smooth and uneventful.

The three-part communication – between Melon, Tribal and ABF, on one hand was more demanding and complex than it would have been between only two parties. But when working with an agency, it is always better to be directly involved with the decision-maker. So, again, after the restart of the project, the process was painless and straightforward.

Both Tribal and ABF said that they cherished Melon’s consultancy work. We not only developed a website from a list of requirements, but also participated in pinning down the specifications, offering our expert know-how.

One of the things that mattered the most to the client was the modern and appealing look and feel of the new site. Melon’s expertise, accumulated in developing a vast variety of websites was highly appreciated too.

Melon’s work had become part of a bigger transformation for ABF than we expected. The launch of the site was part of not only their new identity strategy, but also of the organization’s move to further embrace new technologies with the help of the Melon team.

In a nutshell, the end result for the client is a bilingual presentational website meetingb all the needs and preferences of the client. It  features:

• Modern and appealing look and feel;

• Improved usability, ease of use and user interface;

• And dedicated developers’ and designers’ monthly hours to add new functionalities and projects.