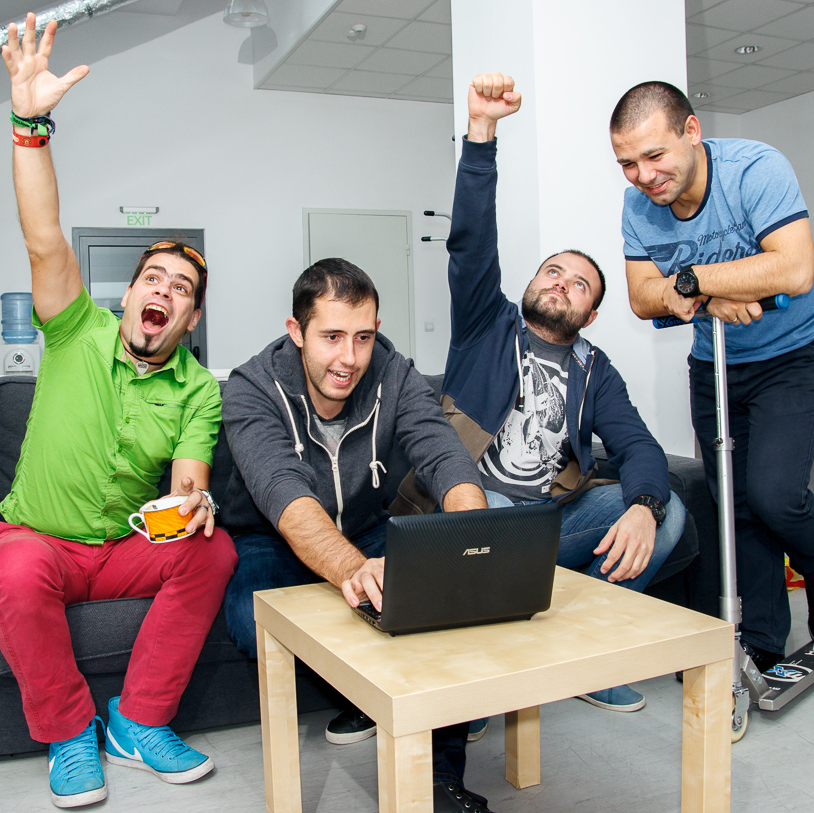 We are like-minded and take all decisions together."

They say their team work is well-oiled and uncomplicated. They say the reason is that all of them are cheering for PFC CSKA Sofia. And if there’s trouble, it comes with the Premier League because all of them are fans of different English clubs. They are Melon’s System Support team, a.k.a. Bobby, Ivo, Iliyan and Yuri.

Boris Ganchev arrived at Melon first, on his birthday on 15 November 2010. Back then, he was living and working in the UK and wasn’t very happy with his job there. He was visiting for two months and decided to go through the job ads, just for the sport of it. He had never heard of Melon before when he came to an interview with the then system administrator. Bobby liked him a lot. He enjoyed the conversation and the described work process. Starting at Melon was one of the main reasons he returned to Bulgaria.

Next came Ivaylo Vrabchev, in September 2013. He also didn’t know anything about Melon until he got to an interview with one of the managing partners and the head of the .NET team. He chose to trust them. “And indeed things have been developing exactly the way the two of them explained, proposed and promised,” Ivo says.

Iliyan started in the beginning of 2014 as an intern and after three months Ivo invited him to stay full time as a Junior Sys Admin. Yuri is the latest addition to the team, since April 2015. While working and studying at the Computer Science Department of the Sofia University, again for the sport of it, he went through the job ads, found Melon’s and applied.

“OK, now we can tell what we broke last, right,” asks Yuri jokingly.

Their job at Melon is to support the system of the company that now comprises more than 150 software developers and other employees, so that it can function the way it’s expected to. Ivo says that they are constantly optimizing and improving it.

Yet, the biggest task ahead of them is to organize and tidy up their room or as Yuri puts it – to eliminate the question: where’s that thing? “Which reminds me of – where are the HDMI cables,” Iliyan asks. “The work is really dynamic and this chaos here is just another prerequisite,” Ivo explains.

Melon’s System Support team has two distinct units – in-house operations and system support services. The latter is in charge of the clients that Melon offers second and third level support to. Ivo says: “It’s very interesting and requires implementing new technologies to facilitate and ease the clients’ work.” The team is also looking for new members by interviewing prospect interns who may eventually get hired as a full-time junior system administrator.

The Melon System Support team’s favorite part of the job is after they successfully complete a big task, when they can see and then celebrate the results. Bobby says that those are the moments when they know they’ve acquired new know-how combined with the incredible feeling of fulfillment.

Every Monday they have a meeting to talk over what they did last week and plan the new one. All organized, the System Support team have enough time for other activities such as to renew their Microsoft Gold Partnership, to watch football games and have beers together. “The exceptional thing about us is that all four people get along really well,” Bobby says. “We are not only the right colleagues, but also very good friends. We are like-minded and take all decisions together. There’re no unhappy team members.”

Also, the guys support Bobby’s musical talent as part of Melon’s band The Tarricates. As they put it – here we have gathered one musician and three musical cripples. The very first day Bobby started at Melon TheTarricates had a rehearsal and he asked to join. Ever since he’s been playing keyboards. At the moment the band’s rehearsing once a week to get ready for their annual December concert at Mixtape 5 in Sofia. Usually they gather between 200 and 400 people. “Yeah, with no marketing whatsoever,” Bobby says. “After all, three managing partners play in the band.”