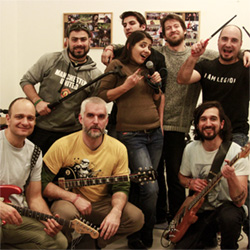 I don’t think there is a final destination, the little steps forwards is what matters.

A poet once said: “Music is the universal language of mankind”.

The members of the music band The Tarricates are indeed men of many languages – C#, JavaScript, Python, .NET, Ruby, Serbian, Bulgarian and many more. Every Wednesday after work, the group of eight colleagues and friends gather at Melon HQ to rehearse.

The Tarricates are an amateur band that covers artists like Pink, The Beatles, Rage Against the Machine. Six of them are Meloners. They are managing partners, team leads, sys admins, developers and designers. Two of the members are just friends who happen to be very good musicians.

It all began some ten years ago when Antoni, Petar and a female vocalist started the band as a trio. Back then they were playing only acoustic songs. Throughout the years, the Tarricates have been growing and expanding their set lists.

How can you become a member of The Tarricates?
Bobby: I had to get a mortgage.
Toni: We have ISO certification for recruitment.
Svarc: If someone at Melon plays an instrument or can sing, we invite them to join the band.
Toni: The Tarricates is a democratic and organic bunch. We don’t have regulations. Sometimes we have two or three people who play the same instrument, but that is good because we can cover a wider range of music genres. We used to have two bassists, two drummers, we still have two guitarists and three vocalists. Now is a little bit different, because we are trying to go to the next level and to have more gigs. Our band is very dynamic – annually people are coming and going.

Where do you perform?
Toni: Traditionally, we have one annual gig in mid-December – a pre-Christmas concert at a random music venue or night club in Sofia.

Which is the most embarrassing or funny stage moment?
Svarc: Chronologically or…
Toni: We want to forget.
Svarc: One of the funniest moments was when the audience hit Bobby against a column, assuming that his sumo costume will spare him the pain.
Bobby: Yes, once I dressed in an inflatable sumo costume and decided to stage dive. The audience thought that the costume could protect me. So, they punched me in the ribs and at some point twenty people pushed me against a column. It was fun.

What kind of music do you play?
Emo: The genre is тарикатски.
Svarc: People in the band have different music tastes. Everyone’s vote counts and of course everyone dislikes a song or two.
Toni: This democratic approach works pretty well. Looking back at our set lists, I see that we have chosen great and meaningful songs.

Do you have your own songs?
Svarc: 0.3 of a song – we had some guitar and bass guitar lyrics and chords but that's it. Writing your own song takes a lot of time which we lack.

Is there a cross point between music and working at Melon?
Svarc: Democracy with all its advantages and disadvantages.
Emo: Diversity.
Bobby: The friendly atmosphere.

Do you feel like rock stars?
Bobby: Only during the gigs.
Svarc: We convince ourselves that we are…
Toni: After the third beer.
Emo: Especially when I look at the pictures from our gigs.

What’s next? What are your future artistic plans?
Toni: You will hear ten different answers. The Tarricates started as a hobby. I don’t think that any of us will quit our jobs in pursuit of music career. I just want to have music in my life. That’s enough for me.
Emo: I completely agree with Toni. I see The Tarricates as a candy. I mean, this is a band, in which people can come and go. I just wish we get better synchronized.
Ali: I imagine the day when The Tarricates will have their own set list. The feeling of creating something that will move people out there is amazing. I enjoy the covers, however writing our own songs will get us to the next level.
Bobby: I am a little bit more pessimistic or realistic and I think that most of us don’t have the time to create our own music. Listening to the records from previous years, I can see that The Tarricates are getting better. We are getting more serious during rehearsals too – it’s not only about eating pizza any more. I wish we could start playing at more interesting events or locations. For example, at the sea side or in the mountains. It will be fun to have such kind of mini tours.
Svarc: I don’t think that there is a final destination, the little steps forward is what matters.

Do you have anything else to add?
Emo: Our next concert is on April 21, in Blagoevgrad.