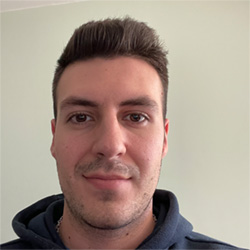 Melon is an enjoyable place to work with friendly and supportive colleagues who are always willing to help.

Kristiyan has had an interest in technology since he was a young student. After graduating from high school where he specialized in information technology, he chose to continue his education at SoftUni in the capital city of Sofia, Bulgaria. He enrolled in a coding course and his enthusiasm for software development continued to grow over time.

About Melon he learned from a friend who suggested the company as a place where Kristiyan could find a welcoming environment and an opportunity for a long-term development. Another friend of his who was already working at Melon encouraged him to apply.

“The moment I entered Melon's office in Sofia, I was surprised how much I liked the people. Their skill to listen and joke helped to calm my nerves. The thought of working in a setting like this really appealed  to me, as did the workplace,” Kristiyan says. He began his career as a .NET developer in June 2022.

Kristiyan enjoys working at the office and is happy that more and more people are getting back into to the office. He and his team often hang out after work.

He says that he has changed a lot in the four months he has been a part of Melon. “I have learned many new things, and practice has helped me to improve,” Kristiyan shares.

Since the beginning of his time with Melon, he has worked mainly on one project which presented him with a different technology from what he had previously encountered. Kristiyan is not afraid of challenges, on the contrary, he enjoys learning new things. He doesn't hesitate to seek advice from his team members, if he gets into difficulties. "I investigate, learn, and apply. I believe that one can grow this way," he says.

For him, Melon is an enjoyable place to work with friendly and supportive colleagues who are always willing to help. Kristiyan adds that the company is a good environment for career development. He has made a lot of new friends during these months as a part of Melon. "The various social events the company hosts are the ideal occasion for me to have fun with my new coworkers,” Kristiyan says.

The most important lesson he has learned so far is how to work in a team because, up until this point, he had only coded alone. Working in a team was new to Kristiyan, but also highly beneficial.

Kristiyan’s advice for the new software developers joining Melon is to not be afraid to ask questions because their teammates are always going to help them and give them advice. “Don't worry if you don't know everything,” he says.

Kristiyan is quite busy balancing work, social life, university, and working out, yet he succeeds and manages to accomplish it all.