If you start a conversation with our software developers in our offices in Bulgaria and North Macedonia, you will inevitably stray into topics on amazing hobbies like non-profit activism, craft beer brewing, dog training, parenting counselling,  photography, rugby and cricket, and many more. Did we mention music? We are proud with the up-and-coming rock band ALI which members – all but one, are from Melon.

Their first two singles released in Spring 2020 both hit #1 on the Bulgaria’s rock chart. The second single even went #1 on the Bulgarian National Radio’s overall music chart. Five of the seven people in the band are our teammates at Melon. Another one is a Melon alumnus. The bass player, always an exception, is a long-time friend and university classmate of Melon’s partners.

The guys have been lucky in many ways. They all became part of Melon. Once there, the active social environment made it certain they found each other. It’s a textbook example of how creativity blooms where people are free to interact and share ideas.

The roots of the company’s close relationship to music can be traced back to 2005 when two of Melon’s partners, Tony and Schwartz, started an acoustic guitar duo. As the company grew, they welcomed all employees interested in playing music into the band. It was an open and fluid community. In 2014, with Orli, the drummer, and Ali, the lead singer and songwriter, the band came closer to a proper rock band. Emo, back vocals, had been with the band for several years already. On keyboards to this day is Melon’s alumnus, Bobby, a close friend to our developers’ team and the band. The band members come from all Melon departments – DevOps Operations, Web and Mobile, Marketing, and Design.

With time, they have grown into using a professional rehearsal room, but for years they rehearsed at Melon’s spacious get-together common area. There they played over 200+ songs and crafted their first versions of the successful debut singles “I Come From The Future” and “Better Place”. Media representatives are often intrigued how come some IT guys’ office band can evolve that much. It’s difficult to deconstruct the formula, but obviously something went right and Melon was a big part of it. 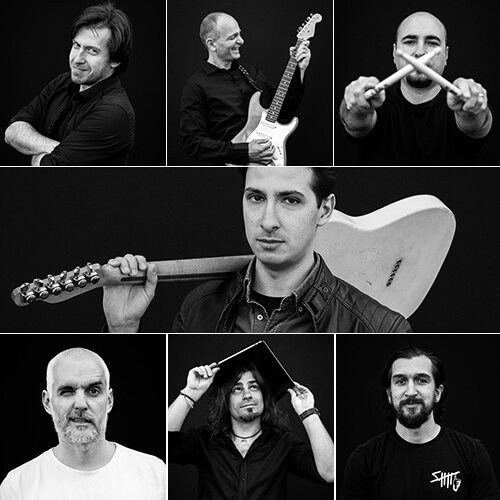 Other colleagues offer great support to the band. Ever since they were just a cover band, you could meet as many as 30-40 colleagues at their traditional pre-Christmas concerts. They also played at a couple of company’s birthday parties, teambuilding events and played Skopje’s clubs with many of the local colleagues in attendance. Today, they encourage the band by voting and sharing their music, as well as offering honest and constructive feedback.