Being smart, nice, and making things happen is the attitude we’ve adopted.  We  know we’re on the right track, when we see our team members dare into new out-of-work ventures and not only try, but also win.

On Nov 29 all of the teams presented their ideas in front of the event’s jury and quite some audience of interesting and engaged people of all walks of life. Ivan’s team won the big prize by Fine Acts – 2500 BGN to further develop their project. During the event, we noticed another friendly face – Dean Panayotov, Melon Android developer until recently, whose team idea got adopted by TimeHeroes and received free hosting by SiteGround.

A little bit more about their ideas: 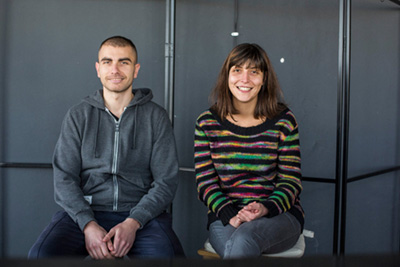 Their project addresses the lack of awareness of fake news. Ivan and Iliyana built their idea on food analogy. They will start a new branch of pop-up pavilion, Fakery = fake news + bakery. It’ll open with a big buzz, offering free and exclusive cupcakes. However, to the hungry audience’s big surprise, these deliciously looking cupcakes will be gross. Thus they’ll raise awareness that fake news is like junk food – looks attractive, but is rotten on the inside. That’s why we all have to be careful and conscious of our internet consumption.

Ivan said that ‘This was one of the best spent weekends recently. The event made me think about numerous issues. Of course, after a few days of hard work, the excitement about the award made it even sweeter.’

The project is an interactive VR room aimed at introducing the society with transgender people. Sound, touch and sight will be used to familiarize the public with Jane’s story. ‘I met many interesting people - artists, architects and others, including my team-mate Tsveta. Excellent mentors helped us shape our idea,’ said Yan.

It is an audio-visual installation, demonstrating the misbalance between useful information and entertaining videos. A huge screen at an open public space will display the idea. Entertaining videos with cats, etc. will be playing most of the time and only for a few seconds news on important events will be shown on split screen.  You get the idea – we spent much more time on watching cats than on news, art or other important topics. .

Melon is extremely proud when our smart and nice colleagues join curious and intriguing projects like this one.  We salute all the artists, developers and mentors who participated in the challenge and are looking forward  to new ones to come.